42 buyers registered and bid on the 22 carefully screened bulls which were auctioned by well respected stud stock auctioneer Brandon Leer.

The quality of the bulls was excellent and bidding was keen on all lots.

The top priced bull, Lot 6, bred by Andries van Niekerk was sold for R72000 to Ian Cameron from Natal and Graham Hart from Komga. Two other bulls namely lot 4 and lot 7 also Cattleman genetics sold for R55000 each and were sold to Mark Ford and Werner de Jager respectively. 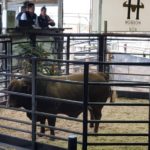 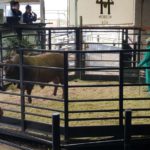 Benchmark Beefmasters is a combination of the old and the new generation of Beefmaster breeders.

The Stretton Family’s relationship with Beefmaster cattle began in 1982 with a visit to The Isa Cattle Company in Texas. Charles and Cathy Probandt were the hosts for the duration of the visit. Here they saw beautiful cow herds and personally saw the Lasater Bull L513.

In 1984, Trevor Stretton accompanied Compa Beefmasters on a further tour of Beefmaster herds in Texas, and with the help of Charles Bradbury, were able to secure semen from older generation bulls such as True Levi, Barroncetto, Crimson Warrior, Dun Dick and other bulls available in Texas.

In 1986, the first calves of genuine Beefmaster bulls were born on Coldstream in the Eastern Cape.

In 2001, Beefmaster Alliance imported 2 Laurie Lasater bulls which were used in the Creative herd.

WO genetics have also had a major influence on the Creative Beefmaster herd in producing heifers that calve at 2 years of age and produce bulls with thickness and capacity.

The Ford Family farm Begelly is situated south of Grahamstown, in an area which has all the well known tick borne diseases.

In 1999, The Ford family sold their dairy herd and purchased three separate herds of Simbra, Tauricus and Bonsmara cows from farmers who had sold their farms to become game farms in 2000. They imported 30 Simbra stud cows and calves and 4 Bulls from the well known Metsibra Simbra Stud in Nambia. This became the nucleus of the Begelly Simbra Stud which was sold in 2006.

In July 2014, the Stretton and Ford beef farming operations decided to combine the Creative and Begelly Beefmaster Herds to form Benchmark Beefmasters.

At present, Benchmark Beefmasters has a female herd of approximately 1000 cows and pregnant heifers and a further 450 replacement heifers. There are also 100 young bulls on the farms at present which will be screened and selected for the Annual Benchmark Beefmasters Sales which takes place in Queenstown on the third Friday of August each year and in Grahamstown on the first Tuesday of September.

Benchmark Beefmasters aim to produce animals that are adapted to the harsh climate of The Stormberg and resistant to the tick borne diseases of the coastal belt.

Stephen van Niekerk (snr) was one of the founding members of the East Cape Midlands Beefmasters. The Southern Beefmaster stud was started in 1986 when embryo cows were purchased from the late Piet Bosch and Tony Brink. Beefmaster semen was imported from the USA and a very intensive embyro transplant program was started on a base herd of South Devan cows.

The embryo program was very successful and by 1988 the 1st Beefmaster Bull sale was held in Komga in conjuction with Graeme Hart, Dave Hart, Trevor Stretton and Ken Brown.

By 1990 Stephen and Ken started the East Cape Midlands Beefmaster sale in Somerset East. The sale was held annually for the pasted 25 years until 2015.

Cattleman Beefmaster started in 1990 when Stephen retired from farming and sons Andries and Stephen (jnr) each started their own studs.

The Cattleman stud is bred strictly according to the Lasater Philosophy and has concentrated on fertility and breeding a genetically superior animal.

The Cattleman stud has in the pasted only purchased Top Bulls from the BosBlanco, Hart, Ottoshaw and in 2015 the record priced bull from the Benchmark Stud.

All bulls purchased are selected and approved by our Beefmaster Inspector and consultant to the stud Mr Erwin Church.

The stud follows an intensive AI program – where live semen is used from these top bulls.

The stud consists of 400 head of registered Beefmaster Cattle that run on Hartwater, Gall sick and Red water veld.

Cattleman Beefmaster looks forward to partnering with Benchmark Beefmaster and Hobson & Co for the 1st Heritage Beefmaster Bull sale to be held on Tuesday 6th September 2016.

We look forward to seeing you there.